Napa couple bucks the trends in business and love 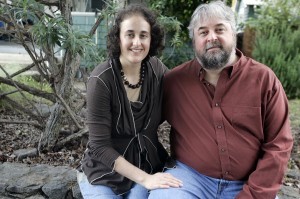 In today’s world of high divorce rates and daunting new business failures, Lisa and Louis Gottfried of Napa are bucking the trends. The couple, who are both founders of their own companies, are not only running successful businesses; they are also raising three children, ages 5, 11 and 14.

Gottfried cited her youngest child entering school as the tipping point for her company. With everyone occupied from 8 a.m. to 3 p.m. every day, she was able to shift from her role as mom to CEO.

Her company, Video in a Minute, creates short videos for clients to use in email campaigns and on their websites. After studying online videos, Gottfried said she realized that the majority of them were too long, lacked a solid and effective script and were not being leveraged to create an impact that fulfilled their potential.

With a thoughtful approach to her craft, Lisa Gottfried said she encourages her clients to let their guard down and show a personal side that will connect with their audience.

“It’s all about the human piece. The videos should be an extension of the tasting room or a backroom conversation,” Gottfried noted when talking about her winery clients.

The businesswoman also urges her clients to keep videos to a minute and a half in length and close them with a call to action. In the analysis she has conducted through her clients’ mailing lists, she cited the view rate of videos embedded in emails as 75 percent once the email has been opened.

“People are into it,” she exclaimed while highlighting the importance of tying everything back to the brand messaging and creating engaging content that holds the viewer captive.

One of the most effective uses of video she has seen by the wine industry is in wine club expansion, Gottfried said. She used Elkhorn Peak Cellars as an example, saying that each video they send out rewards them with enough new wine club members to cover more than the cost of producing it.

The industry average for producing a web video is $1,000 per minute as pertains to video length. Gottfried said she likes to shoot multiple videos at a time — often recording three to six for a client in a single day — using the crew that includes camera, lighting and sound.

Gottfried described the quick growth of her company is “whirlwind.” When she talked about managing her growing business as well as her family, she credited her husband and children for their participation.

“We lean on the older kids a lot. Everyone has to pitch in,” she explained. Louis Gottfried agreed, adding that keeping two businesses and a household running is “a real family effort.”

Unlike his wife, who works from her office at home, Louis Gottfried makes a daily commute to Emeryville where his company, Godengo, is located. Godengo was created to meet the growing need of print publishers to create a formidable and profitable presence in the digital space.

“It’s a scary time for media companies,” Louis acknowledged. “We want to partner with them to get them into this new paradigm of digital media.” As printed publications continue to make their way online, Godengo maintains a growing menu of robust solutions to increase a website’s traffic, appeal and profit margins.

Rivista, Godengo’s most popular product, is a content management system (CMS) that was designed specifically for the magazine industry. The application allows publishers to provide written and visual content on their websites in a format that is easy for employees to update and aesthetically appealing for viewers to read.

When the application was initially designed five years ago, the options for a CMS were limited, Gottfried said. Not all were user-friendly and many were cost prohibitive. The goal of the Godengo team was to provide a high-quality content management system at an affordable price, he said.

Today, small and large magazines ranging from Benicia Magazine to Wine Enthusiast are using Rivista as their CMS. According to Gottfried, such publications typically double or triple their web traffic in the first six months.

As the digital industry continues to expand, Godengo is following suit. “A CMS should be able to be used for any kind of presence,” Gottfried noted. Rivista currently offers content delivery to iPad and iPhone apps and will soon have the ability to interface with social networks and third party aggregators, which pull content from various sources and display it in custom magazine form. Gottfried likened a CMS to a hub and each outlet — print, websites, social media, apps and aggregators — to the spokes.

Although content management systems represent a large portion of business for Godengo, the company also offers a collection of other notable products and services that range from innovative applications, searchable online directories, custom web design, website implementation, advertising and consulting services, he said.

With all types of media converging online and the success of both companies, Lisa Gottfried’s enthusiasm for continued success seems to have merit. Despite having thriving businesses for some time already, “it’s now that we are coming into our own in business,” she said.

As for the continued happiness of their marriage, Lisa Gottfried said that their lives “are about figuring it out together. It helps that we are so committed to each other and have huge love for one another.”