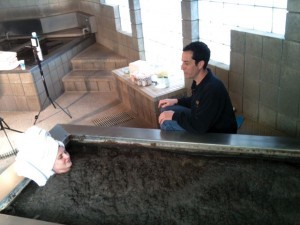 So, why is well-known vintner Judd Finkelstein standing handcuffed by police in front of Buttercream Bakery in Napa?

Nor will he explain what he’s doing chatting with a lady reposing in a Calistoga mudbath.

“I don’t want to give it away,” Finkelstein said, mysteriously.

The answers, he explained, will be revealed to those who watch his newest creative endeavor, a five-minute video, “Auction Napa Valley — Journey of the Weird Guy.” This year’s chairman of the Auction Napa Valley Pride Committee, Finkelstein said he set out to create this first auction video to “get all of Napa Valley aware of (the auction) and excited and educated about what it means for locals.”

This year’s Auction Napa Valley June 2-5, is expected to bring hundreds of visitors to the valley to attend a long weekend of parties that culminates in “the grandfather of charity wine auctions.”

“It’s a big party,” Finkelstein said, “but not a lot of locals go to it.” Tickets, for example, to the Friday barrel auction and tasting event, priced at $350 a person, sold out in a record seven minutes this year when they went on sale in March.

“(The Auction) does some wonderful things,” Finkelstein noted; and that is what inspired his film which is now posted on YouTube.

In the past, the Pride Committee has made presentations to local civic groups about what the Auction means for the county. Finkelstein said, “I thought it would be fun if we could do something that everyone can see. We wanted to be inclusive.”

No stranger to creative endeavors, Finkelstein was responsible for “Judd’s Enormous Wine Show” about his family’s Judd’s Hill Winery. He is also reported to raise chickens (Napa Valley Register, April 2).Declining to take sole credit for the work, Finkelstein said the video is a “collaborative effort” with a friend and Los Angeles television writer and producer Matt Sloan. He also worked with Ann Steinhauer from the Vintners and Lisa Gottfried of Napa’s Video in a Minute.

In the film, Finkelstein stars as himself discussing the Auction with residents from Calistoga to American Canyon. “I get carried away with enthusiasm,” Finkelstein said, adding that the pink handcuffs, with which the Napa police presented him at Buttercream, were a surprise to him. “I hope no one notices they are pink,” he said.

Auction Napa Valley “touches everyone in one way or another,” said Julie Crafton from the Napa Valley Vintners. “As Judd Finkelstein is the artistic genius behind the video you can trust that it will be a fun and quirky representation of Auction giving.”